There’s a trend emerging in U.S. schools currently, including here in Baltimore and surrounding counties, to improve school culture by fostering healthy interpersonal and intrapersonal dialogue instead of by using the more traditional punitive approach to deal with problems. Restorative practices (RP) gives students concrete tools with which to resolve conflicts with others as well as internal conflicts that might be preventing a given student from realizing his or her potential. RP, thus, “restores” both the community and the individual to wholeness.

Although RP is sometimes associated with schools in crisis or as a last-resort way to redirect students otherwise headed for the criminal justice system, it is more accurately applied much more broadly. RP is useful in any social setting because its primary goal is to promote relationships.

That’s why The New Century School‘s Head of School Alicia Danyali has begun using RP at TNCS. “Restorative practices has been my focus for the whole year,” she said, “because I think it’s beneficial for any relationship. It has been around for about 30 years as a reaction to chronic poor student behavior. Although we do not have that problem at TNCS, I am very interested in giving TNCS students this tool to take ownership of their words and actions—that’s where the ‘restorative’ comes in.”

During the 2016–2017 school year, Ms. Danyali attended three professional development sessions with the International Institute for Restorative Practices (IIRP) to ultimately become a “Trainer of Trainers,” meaning that she is now certified to teach TNCS staff (or anyone else) how to implement RP within their classrooms. She also attended sessions in Social-Emotional Learning (SEL) and Character Development (CD) at the University of MD, put on by like-minded educators from Rutgers’ School of Social-Emotional Learning (SEL) and Character Development (CD) in Schools and After-School Programs. She became familiar with RP through her colleague Barbara Sugarman Grochal, Director of School Conflict Resolution Education Programs, Center for Dispute Resolution at the University of Maryland Francis King Carey School of Law. Said Ms. Danyali:

I’m a longtime believer in restorative practices in education as well as private industries. I read the books; it was life-changing. Hearing [Ms. Grochal] speak is the reason I got so interested in restorative practices. It fits with so many of the other things I was interested in like mindfulness and strong, supportive emotional and social character development. These disciplines all send a similar message but use different tools and strategies to effect their outcomes.

She even brought Ms. Grochal to TNCS as an independent consultant to talk about RP to staff during TNCS’s first professional development day back in October. They learned about the RP ethos and got a “crash course” on how to use RP strategies. Since then, Ms. Danyali has undertaken subsequent trainings, working in small groups as needs are identified to present possible activities that teachers can use. She sometimes works within the classroom herself and other times models an approach for the classroom teacher to start from. Her goal is to have everyone ready to use RP as needed for the next school year as part of an overall increased emphasis on social and emotional learning (SEL):

What can teachers do to keep this message of teaching the whole child going? We want our children to be emotionally competent. They are facing things that previous generations haven’t necessarily had to deal with socially. They don’t have that much face-to-face contact, and I think that’s a component that’s missing, to ensure accountability. We live in a society where everybody has a platform to speak their mind. I also want students to know that if they send a message for example on SnapChat airing a certain opinion, they still need to take accountability for that. There is a unifying theme to all of these things I’ve been exploring that I hope will support teaching the whole student. I professionally see equal value in SE/CD for student growth as in the academic portion.

A facet of the “trial run” she has been doing lately is in figuring out how to implement RP in age-appropriate ways. “The research shows that you can plant these seeds very young.” said Ms. Danyali, “If we plant conflict resolution tools even in students as young as age 2, those are not only part of our pillars of what makes a TNCS learner—compassion, courage, service, and respect—but also vital skills that they can use to navigate challenging times in their lives. We’re currently working out how to make it age-appropriate and differentiated, such as with how much time is needed among the various age groups.” Sixth-graders can handle lengthy discussions, but 2-year-olds need a modified approach, such as gauging the pulse of the class during the morning meeting and modeling empathy.

Restorative Practices in the Classroom

Exactly how RP works in application comes down to one essential premise: that we are not responsible for anyone else’s thoughts or feelings, but we can work as a community to raise up a community member in need of support. “We all come from our own personal stories, we take a lot of baggage, but restorative practices reminds us that we’re conditioned to react in a certain way to what goes on around us, while allowing the facts to evolve without the emotion. You may have experienced trauma in one of any number of forms, but that doesn’t excuse treating other people badly. Taking accountability, repairing–it can be as simple as something that happened on the playground when unkind words were used,” explained Ms. Danyali.

Thus, RP can undo the negative stories students might be telling themselves. “It makes us more aware that ‘I’m not only responsible for myself, but when I’m in a community setting, there’s an expectation of how I treat others’,” she said. 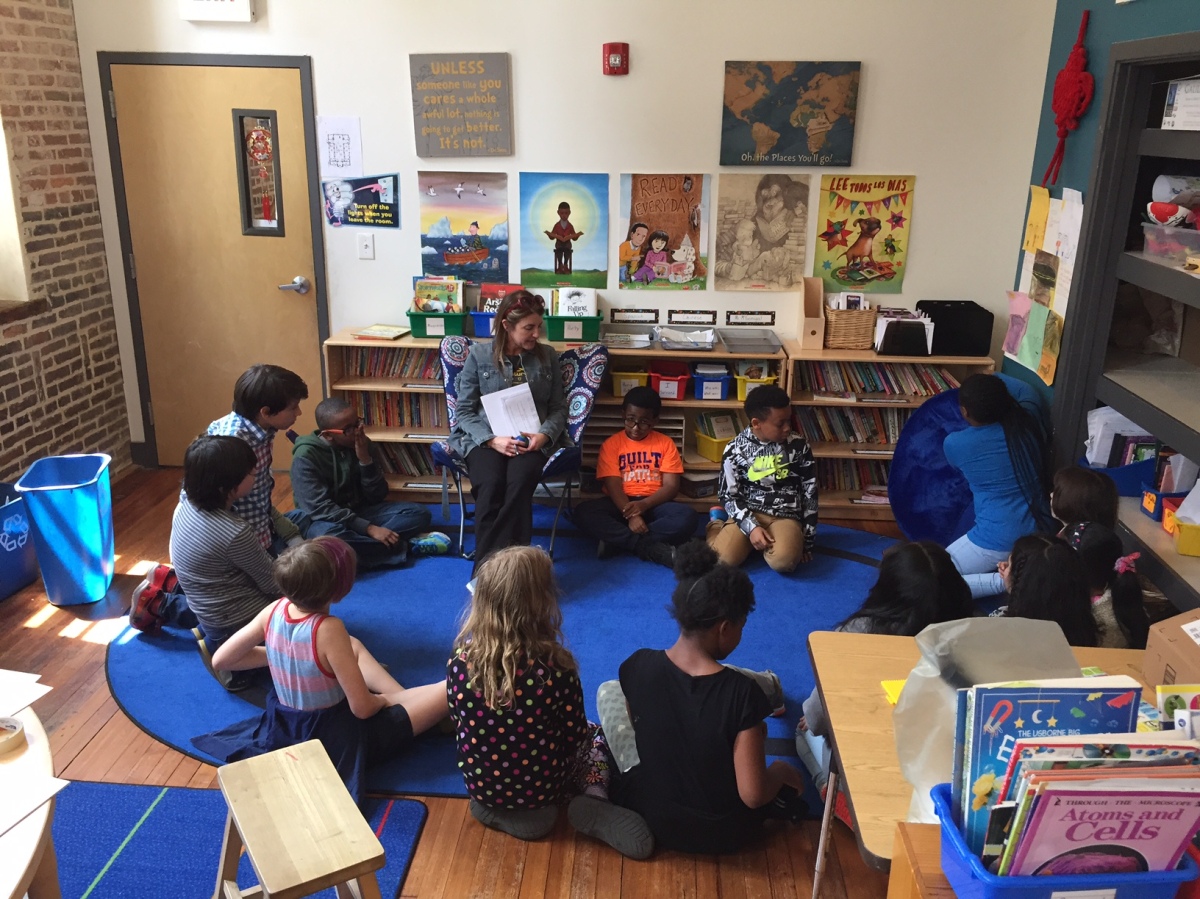 Circling is probably my favorite tool among the arsenal because you can see everybody. Everybody is exposed, and everybody’s voice is heard. It forces the issue of really listening to others and reminds us that everybody’s voice is important. There are so many valuable concepts that go along with this, and a lot of it is intuitive, but the most important part to me is that there is trust. What we say here in our community is okay, because we care about our community and everyone in it. Restorative speaks to working with students instead of doing something for them or even to them. I’d rather do with because when we’re working together toward the same goal, we’re making real progress. There’s also the sense that my teacher trusts me, or I’m not just here to please others.

For the last quarter of the school year, Ms. Danyali has been regularly visiting elementary classrooms and circling the students for discussions on a wide range of topics and with varying goals. For example, Señora Cabrera felt that the 2nd- and 3rd-graders were not focusing as the end of the year draws near, and in-class work was not getting completed. She was having to constantly redirect them and ask them to refocus. “RP allows you to be transparent about your goals,” said Ms. Danyali. “I told the class what Sra. Cabrera had observed about their high energy and said to them, ‘I just wanted to come around and check in with you. This is your community. Let’s sit in a circle and talk about it’.” This led to a discussion of “norms”; just as norms would be set in the workplace, they also need to be set in an academic environment.

So I said to them, ‘I know you set classroom rules at the beginning of the year—why aren’t they being followed? We’re going to revisit those rules now. I think you know what they are, but we’re going to talk about what our expectations are in a respectful environment, and that’s called norms.’ Everybody gave suggestions and I wrote them down verbatim on a big chart. The next day I followed up with another circle and brought the norms list to take another look at and provide feedback about what we had created now that they had some time to mull it over. There’s always a reflection piece to restorative practices. ‘Never be disrespectful to your peers or to your teachers.’ I asked how they felt about this–does anybody disagree with anything or want to add something? One student replied that she felt the word ‘never’ was too strong. ‘None of us are perfect, and sometimes we mess up. I worry about the consequence if I mess up. And I don’t want to let down my community.’ I thought that was so deep and reflective and accountable. It turns out that everyone wanted to change the wording, so we agreed on new verbiage and we moved on! 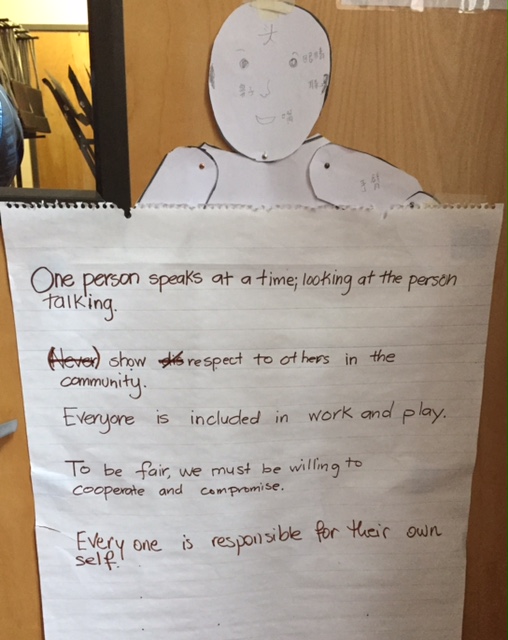 That example embodies how RP works, but, as mentioned, it has wide-reaching applications. She also circled the 4th- through 6th-graders recently to get their feedback and thoughts on how they felt taking the Independent School Entrance Exam (ISEE®) on an informal basis as well as what they were anticipating during their upcoming overnight trip to Echo Hill Outdoor School.

Ms. Danyali explains her approach to circling this way:

I set a lot of boundaries to keep things brief and above all respectful. I gauge the attention span and where we are in the day. Something I’ve been using regularly in circles during class time is the ‘talking piece.’ As a teacher, it’s a valuable tool to get feedback and to, for example, rein in some of the excess energy during hard transitions like playground to classroom. In 60 seconds, you can get everybody on the same page—all right everyone, what are your goals for the afternoon, pass the talking piece and let each student speak briefly, and it resets the stage. You’ve said what you’re going to be accountable for, and you go off and do it. I end with community-building questions: ‘Who found out something new about a classmate? Who found they have something in common with someone else that they didn’t know before?’

To respond to challenging behavior, restorative questions might include:

To help those harmed by other’s actions, restorative questions might include:

Ms. Danyali wrapped up the RP discussion by saying, “I’m not doing this because I feel that our students are headed down the wrong paths but to remind them of what we have to be grateful for. In general, I believe that we have to combine best practices from a variety of sources. There’s so much invisible curriculum in this school already of tolerance and of understanding and cultural understanding—wouldn’t it be nice if we had a really deep understanding of ourselves and be okay with owning up to it when we make mistakes? The main thing I want our community here to understand is that RP is a mindset of coaching.”

7 thoughts on “TNCS Brings It Full Circle with Restorative Practices!”