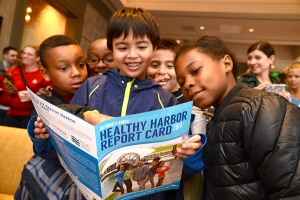 TNCS upper elementary enjoyed their last field trip of the year that was fun and educational. (Photo courtesy of The Daily Record.)

On June 4th, The New Century School‘s upper elementary class took a walking trip to Harbor East to attend Baltimore’s annual “Healthy Harbor Report Card 2014 Release”. This field trip was the culminating event of STEM teacher Dan McGonigal’s yearlong in-class exploration of our local waterways—how to keep them clean, why they are so critically important, and what responsibility Baltimore citizens individually should assume regarding these bodies of water. It was an ideal theme, inviting exploration from many STEM angles, and it also set the tone for Mr. McGonigal’s extremely successful first year at TNCS. From the STEM Fair, to Earth Day community outreach in the form of storm drain stenciling, to attending the Health of the Harbor announcement, TNCS elementary students have made a deep connection with Baltimore’s very special natural environments this year.

Mr. McGonigal said that in addition to closing out the water theme of the 2014–2015 school year, he also wanted “to make the end of the year productive, but also fun for the students.” Achieved in spades if these photos are any indication! 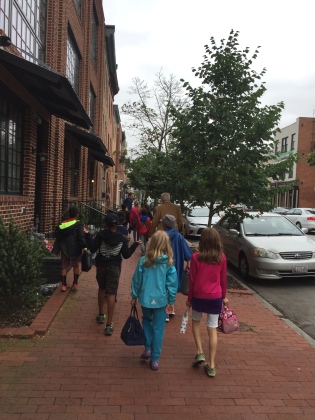 Mr. McGonigal gives a brief reminder about why they are attending the Report Card Release.

TNCS students even got a healthy snack to keep hunger in check during the lunchtime event.

Students got a little pre-speech funtime!

With the Jones Fall Water Wheel making a picturesque background, these students take a quiet moment to catch up. 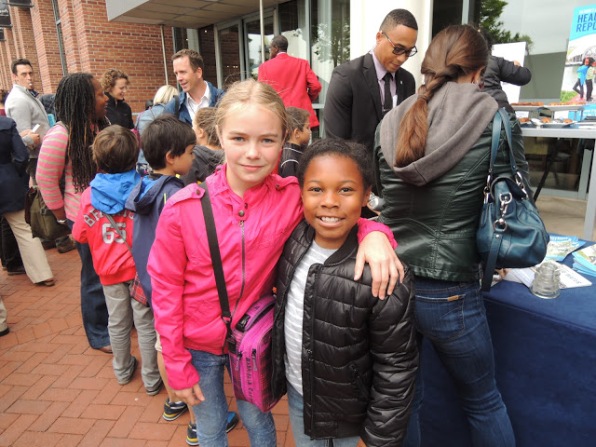 Excitement builds among the students as the presentation is about to begin!

Sudden rain drove the event indoors, but it went off without a hitch, and everyone present increased their commitment to this worthy cause.
And it’s no wonder—Baltimore has achieved something unique with its concerted efforts to make the Inner Harbor swimmable and fishable by 2020. Swimmable?! Fishable?! You read correctly: Healthy Harbor is an initiative of the Waterfront Partnership of Baltimore, and the Report Card, which is ultimately a tool that helps communicate the swimmable/fishable goal and track progress, is the result of the Waterfront’s partnership with Blue Water Baltimore (whom you may recall donated TNCS’s storm drain stenciling materials). 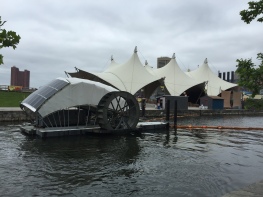 The water wheel in all its glory—Fun fact: trash picked up by Mr. Trash Wheel generates power for Maryland homes!

To meet this lofty aim, which many once deemed utterly impossible, Baltimore installed the Inner Harbor Water Wheel at the end of the Jones Falls in May 2014 to intercept trash (which everyone who has ever laid eyes on the Inner Harbor recognizes as its biggest current plague). Invented by Baltimore resident John Kellett and his company Clearwater Mills, the water wheel has gained worldwide fame and provided the inspiration for similar water clean-up initiatives to be proposed globally, from Rio De Janeiro to Rotterdam.

The ingenious design of this water wheel is a “game-changer for trash in urban water bodies!”

“Mr. Trash Wheel,” as the water wheel is now known, has accomplished some pretty extraordinary feats, as his Facebook page and frequent tweets attest (#MrTrashWheel). As of this week, in fact, Mr. Trash Wheel has intercepted 205 tons of trash before it reaches the Inner Harbor in its first year, and a whopping 45 tons from this past Monday’s storm alone! This more than doubles Mr. Trash Wheel’s former single-day record of 19 tons! Read more about the water wheel.

Healthy Harbor showed its appreciation for Mr. Trash Wheel’s hard work at the Report Card Release by celebrating his first birthday with a cake made of refuse—Mr. Wheel’s preferred intake, of course. And there was certainly cause to celebrate, because the Report Card—for the first time ever—showed a passing grade for Gwynns Falls! That the grade, a D–, is only barely passing is not the point. As one TNCS student remarked, “even though things seem bad, they are getting better.” That’s exactly right! Baltimore waterways are moving in the right direction. The plan is working, as presentations by representatives from the various stakeholders, including District 46 Delegate Brooke Lierman, clearly demonstrate. 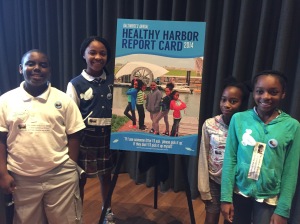 Featured on the Report Card’s cover, these John Eager Howard elementary students are part of their school’s Green Team and gave a lovely speech on cleaning up the harbor.

Delegate Lierman (and TNCS parent) said of TNCS’s attendance at the event: “Involvement by students, like those at TNCS and John Eager Howard, is instrumental in helping us to ensure that Baltimore residents of all ages are invested in and working together to create a cleaner harbor! I’m so glad that students from both of these schools were able to attend the Report Card Release to learn firsthand about the need for advocacy and involvement to bring about positive change in our City.”

Afterward, Mr. McGonigal voted the walking field trip, “an awesome experience” and was very proud of his homeroom students who were respectful and focused during the speeches and presentations. “We learned a lot about the efforts in place to improve the health of the Baltimore Harbor and other area waterways. We also learned that there is a great effort by many people who are trying to help improve the situation. I hope we as a school can get further involved in projects related to the health of the harbor,” said Mr. McGonigal. He invites your suggestion and ideas for continued work by TNCS students.

In the meantime, you can read the 2014 Report Card here. Need still more good news? It’s here—officially announced just yesterday, Canton may be getting its very own water wheel! Also visit cantonwaterwheel.com for more information and to donate in support of Baltimore’s second water-powered trash interceptor.