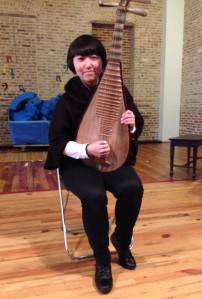 Li Laoshi poses with her pipa just before the concert began.

Li Yangyang joined The New Century School this year from southwest China, where she is a graduate student at Sichuan University, working to obtain a Master of Pedagogy degree. Li Laoshi also has abundant experience teaching Chinese as a foreign language, and TNCS is proud to have her on board. Assisting in the Chinese classrooms is not the only skill Li Laoshi brings to the table, however. She plays pipa (similar to a lute) and guqin (similar to a zither), both ancient Chinese musical instruments. She has completed high-level certification in pipa through the China Traditional Music Association. Xie Laoshi says, “Yangyang is a true artist! ”

On Thursday, October 24th in Building North, TNCS students got to see and hear for themselves just how talented Li Laoshi really is. As part of TNCS’s ongoing focus on studying other cultures as well as The Arts, Li Laoshi presented a 30-minute concert showcasing her pipa music.

“I started playing pipa when I was 7 years old,” she says. “At that time , my neighbor’s daughter played pipa, and when she practiced it, I could hear the music. I thought that music sounded so good, and it made me feel peaceful. When I first saw the pipa at her home, I was excited by its beauty.  I asked my parents, ‘can I play this instrument?’ and 2 weeks later, I saw a beautiful pipa waiting for me in my room. Now, I have been playing pipa for 16 years. I love this instrument very much!”

Li Laoshi played four songs, each very different, including her introductory song (“The Language of Pipa”; 琵琶语), the theme song from a cartoon (“Counting Ducks”; 数鸭子), a war song (“Surrounded on All Sides”; 十面埋伏), and the most popular pipa song in China (“Nezha”; 墨明棋妙 – 哪吒). As she began “Counting Ducks,” she invited the audience to sing along. Lo and behold, the entire student body sang right along—from the pre-primary students to the elementary students! During the last song, which was quite spirited, one of the elementary girls was spotted playing “air pipa”! Suffice to say, the kids loved the concert!

For those of you who could not attend the concert, do not despair! Here is a video of Li Laoshi playing the third song in her line-up. Enjoy!

4 thoughts on “Pipa Concert at TNCS”