Among the many great things about The New Century School is its equal emphasis on The Arts and Humanities with other more scientific subjects—TNCS calls them “specials.” This focus may be a factor in many TNCS families’ decisions to send their children to TNCS instead of public school, where the utility of these subjects seems to be eternally up for debate.

This year, TNCS added a new element to the array of specials: strength training during physical education/movement classes. Emily Socolinsky joined TNCS staff this year to teach phys ed to the two elementary classes. Before we meet Mrs. Socolinsky, let’s clarify what we mean by “strength training” in this context. Although weight-lifting is certainly a means of strength training, it certainly isn’t the only way to get stronger or more fit. Everything from climbing trees to participating in gymnastics to doing squats and sit-ups helps to condition the muscles and build strength. In her recent article in Baltimore’s Child, Mrs. Socolinsky writes that strength training (or resistance training) is a specialized method of physical conditioning . . . [that] is not only safe but beneficial for children to participate in.” And she should know. She is a certified Starting Strength coach with lots of research into the subject under her belt. The most current findings show that “incorporating strength training into a child’s fitness program can increase that child’s bone density, decrease his or her risk of incurring sports-related injury, and improve his or her muscular strength and endurance, body composition, and self-confidence.” 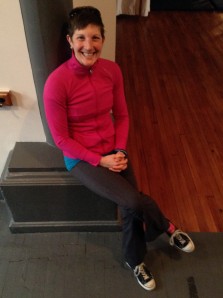 Mrs. Socolinsky also owns her own fitness studio, Fivex3 Training, in Harbor East, in addition to being a Precision Nutrition Level One Coach. Despite all of her credentials, she came to fitness training in sort of a roundabout way. With ballet training starting at age 7, she participated in the TWIGS program at Baltimore School for the Arts, went on to major in dance at UMBC, did an internship in New York City in Production Administration, stayed on at The Juilliard School as a wardrobe supervisor, and then returned to Baltimore (where she grew up) to oversee wardrobe at Center Stage. She switched gears in adulthood, obtaining a Master’s in education to teach 5th grade in Baltimore City schools and later to become school director of Kinetics Dance Theater School of Contemporary Dance. Then, a debilitating back injury prompted her to begin strength training, and suddenly a whole new world opened up. In 2011, she opened Fivex3 (which is training speak for 5 reps times 3 sets), where she says she was able to “integrate all of [her] experience—dance, education, and running a business.” She explains that although she was at first nervous to open a gym, she soon realized that fitness and dancing go hand in hand. She knew how to instruct people to move correctly from her dance experience, so once they have developed sufficient body and movement awareness, she just adds resistance. At Fivex3, she instructs 6–8 participants at a time in a hybrid of group classes and personal training.

Back to TLL, what she does with TNCS elementary kids is the same basic training class she teaches at Fivex3, but modified for 6–9- year-olds. Exercise for kids this age should primarily be fun, says Mrs. Socolinsky. She strives to make sure they are engaged and enthusiastic about movement class, which has clear benefits for lifelong physical health, not the least of which is habituating kids to regular, intentioned movement. “Kids are more sedentary than they used to be,” says Mrs. Socolinsky, “this is a chance for them to get some exercise as well as an outlet for those kids who don’t like sports.”

This month was her first full month at TNCS, and she says she has spent it priming the kids for what’s to come. Getting to know each other as well as class expectations was important, she says, before moving into more structured classes. Once she had a good idea of what each of the two classes needed, she nailed down her approach and the gamut of activities for each one. The older elementary children (third-graders) needed some work in team-building as is developmentally typical for the age group, so their class might involve working in pairs or in a big circle. She wants them to always be moving yet simultaneously be aware of what team- and classmates are doing so they are “successful in their own right and as a group.” She says this teamwork could even filter back into the classroom proper, and they may start to better understand this concept of working with and helping one another.

A typical movement class for the older elementary class first starts with a dynamic warm-up that she likens to a combination of yoga and pilates core exercises (e.g., planks, “dead bugs,” “cat/cows,” and “bird dog”). Next, the students move through “Fitness (or Power) Circuits” in pairs or in teams in which they hone gross motor skills as well as develop spatial awareness. These circuits comprise 45-second exercises such as squats, crawling through hula hoops, chest presses with a medicine ball, and jumping over cones or broad jumping. Through such circuits, Mrs. Socolinsky hits a number of Physical Education Standards for the age group, such as stability, throwing and catching, and even cooperation. Once correct movement is established, she will bring the Gerstung equipment into the rotation.

For the younger elementary class (first- and second-graders), class is markedly different. Mrs. Socolinsky says she teaches this one in a “more creative movement–centered way, using songs that give guidance.” She also incorporates a lot of imagery for this age-group. Warm-up here might consist of “making a pizza,” for example, in which the kids sit around a large “table” and stretch across it to prepare the pizza, miming rolling out the dough, smoothing on the sauce, and adding toppings. Imagination playground is also a component of this class, in which basic spatial awareness is an important concept to grasp. Each 40-minute class ends with a cool-down.

This gym class certainly sounds more fun than the tedious rounds of calisthenics (or worse, dodge ball) many of us grew up on. Who remembers jogging that mile around the track year after year to demonstrate . . . what, exactly? Anyway, these movement classes are designed to engage and be enjoyed, true, but Mrs. Socolinksky is nonetheless quite serious about them: “There’s no such word as ‘can’t’ in my gym!” she says ;)!